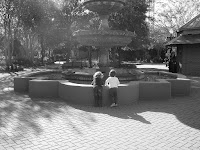 I have been pondering how much of life is about living from the heart and how often I have found myself trying to live in my head rather than my heart. As if somehow I could outsmart life rather than living life on life's terms. If I were just smart enough I could avoid the pain of heartbreak, the pain of disappointment of not knowing when knowing seemed to be of the utmost of importance, knowing what the next step or next right thing was...avoiding making the mistake.

As I pondered tonight I remember how many times in my life when I was perplexed, overwrought and anxious how my heart would capture my attention in the night. I would dream dreams so profound that they would impact my future for many years to come.

My childhood dreams:
I have dreamed dreams since I was a child. My parents often told me the story about how my mother was pregnant when I was just under 2 years old. This was back in 1960 and then there were no routine ultrasounds. At night when I went to bed I was taught to kneel beside my bed and say my prayers.
Mom and dad said I would pray and ask God for 2 babies each night. And each night they would patiently explain to me that babies come one at a time. It didn't cross my mind until I was an adult that by the time I had started to pray for two babies my mother was already several months preggers. Long story short, mom delivered the first baby boy. She said she looked at him in wonder as he was soo small under 5 pounds and she had been soooo big...then the doctor told her she was having another one. She said she looked at him and said I know thinking he meant that she was having another contraction. Then she realized another baby was on it's way out into the world. As she gave birth to the 2nd little boy my father was nearly faint on the floor. After they both calmed down they looked at each other and both simultaneously said how are we going to tell M.K. (me).

Well that's not the end of this story. You see it hadn't crossed my two year old mind to ask for 2 babies, one of each sex. When the newness of two baby brothers wore off I guess I was pining for a sister. (Looking back now I think I was a lonely two year old.) I began to pray for a sister. Well long story short, 13 months after giving birth to twins my mother gave birth to my baby sister. Considering both times mom was already pregnant I think my dreams, precognitive dreams had already begun at the age of two...

Fast forward years later. There were other times, one in particular when I knew something was wrong and it was and all was not well with me "knowing" when things were not well before the adults did. Hence I became anxious and afraid of my dreams. I wasn't capable of "knowing" that my dreams did not cause things to happen, they were nudges to let me know to prepare for life events.

A funny dream. When I was in the 4th grade I was experiencing extreme distress over an upcoming test. I went to bed one night terrified that I would flunk said test the next day when to my surprise that night I dreamed the test. Now how this works is that I did not remember the dream until I was faced with the test paper, pencil in hand and was flooded with the memory of each answer on the test. I like to think that all the dream did was lower my anxiety so that my brain could relax and let the answers I already had logged in my head somewhere float to the surface.

Dreams that rocked my world:
Another dream that I had was when I was in my 20's. This dream shook me up pretty bad as I did not know what it meant and I had not had a disconcerting dream before however as many had come true it didn't occur to me at first that it was probably symbolic. I dreamed I was on the beach, Melbourne Florida (one of my favorite places) and I was there with my father and my twin brothers. I don't know where my mother and two sisters were but they were not on the beach. It was a sunny day with a small breeze blowing. A perfect day at the beach. My father and I were talking and suddenly I noticed the waves were going out further and further each time until the last time the wave, the water literally disappeared from view. I caught my breathe as I knew this was not good!

Then a huge wall of water started for us. As everyone else on the beach started to run away I KNEW that was not the right thing to do. Something inside of me said don't try to outrun this wave. Run towards it! What I am thinking towards it, that wave is so huge and I am so small it will crush me into the ground. No, my inner voice kept saying run into the base of the wave. Run and DIVE into the base of the wave. So I started to run towards the wave and I dove into the base of the wave head first. It was a wall of swirling water all around me....it was soo dark and foreboding. I felt panic and yet peaceful all at the same time as if I had accepted death. Then all of a sudden the desire to survive overtook my complacency and I had to swim to the top. I needed air, now, I needed air. As I swam I was exhausted and I knew I didn't have enough air to get me where I needed to go. It was still dark and I didn't seem to be making any progress when suddenly the thought hit me that I didn't know which way was up! Even though my body and mind were in full panic mode I knew I had to be still. It was if God said to me, peace be still my child, be very still. So I over rode my senses and went limp. To my utter surprise my body started very slowly to float in the opposite direction of how I had been trying to swim to the top. As the momentum of my float increased I once again started to swim hard to get to the surface. Just as my lungs were burning from the desire to take in a deep breathe my body broke through the surface of the water. I gasped and gasped for air. Then as I looked around my father was laying on his back floating like a lifeless fish, one of my twin brothers was trying to swim towards my dad and the other seemed to be stunned and in shock.

This dream, this amazing dream came to me years before the bottom seemed to drop out of my world. I was 22 when my parents went through their divorce. The divorce was like a world war with both sides pulling us apart. Every word and deed was under scrutiny to determine where I loved lied who we were loyal to...it was painful and overwhelming...this was only the first of life experiences to come where I would look back at this dream and find comfort. When the world seems upside down and everything is moving to fast around me, I hear the inner voice that says, peace be still my child and know that I am God. Peacefulness comes from resting in the not knowing. The resting places, just like a resting note in music is as important to my life as the notes that so eloquently play to soothe my soul and touches places that words cannot.

Another dream that I had which really didn't impact me until I shared it with two of my adult children was a dream about swimming. For some reason I was at work and there was pond-small lake behind the building. My youngest son called me and wanted to talk. I had a meeting that day and was torn between my job and my desire to support him emotionally as it sounded like a moment for him. So I decided to meet him by the lake. I don't know why but we ended up swimming in the lake. It was a sunny day with clear water and we swam and talked. Well he talked and I listened. Before I knew it we had swum into cloudy waters. Then all of a sudden I had an strange and eerie feeling that someone was watching us. Several someones were watching us as I looked past my son and saw that alligators had surrounded us. My heart jumped to my throat as I looked at my youngest son and realized I could not with a mother's heart watch him be eaten alive. At that moment a noise was above us. I looked up and there was a helicopter with a basket attached to a ladder coming down towards us. Only one person could get in that basket at a time. My son was insisting on me getting in the basket only I knew I couldn't do that for him. I could not live my life with the memory of alligators finishing off my youngest son. So I told him if he didn't hurry we would both be eaten by alligators and his arguing with me was cutting our chances in half. As he could see I wasn't going to go first he hurried into the basket thinking that he could get me in quicker. When he got in and the helicopter lifted him up into the air, I could see the horror on his face...I could see in his eyes that the alligators were crowding closer in around me and the thought flew across my mind that his heart would be broken. I wondered how he was suppose to go on and be happy with this horrific picture in his mind...it was then that I knew that a mothers sacrifice wouldn't necessarily bring happiness into a child's life and that indeed it might cause them more heartbreak than redemption. I try and remember this dream now when I am tempted to make a sacrifice for my adult children. I remind myself that I should never do for someone what they can do for themselves and that possibly the best I can do is to be happy so they can see me be happy!

Whew...thankful for my dreams. They have brought me comfort many times.

Email ThisBlogThis!Share to TwitterShare to FacebookShare to Pinterest
Labels: Kay